Complete transposition of great arteries affects about 20-30 of the 100000 livebirths, making it the second commonest cyanotic heart defect (1). The first surgical corrections for complete TGA were developed in 1958 and 1964 and called Mustard and Senning procedures respectively. Both involved redirecting the venous return at the atrial level incorporating baffles (2). Baffle leak and stenosis are well known complications of this kind of repair and can be a major cause of morbidity and mortality in this group of patients (3). This makes early detection of baffle related conundrums very important. Baffle leaks are implicated as a potential risk of stroke acting like a PFO especially in patients with device leads passing through. There are still unanswered questions with regards the best modality of imaging and whether regular screening is recommended to detect baffle leaks at an early stage. We present a case of a young asymptomatic gentleman who underwent a combination of imaging tests to confirm the presence of baffle leak.

A 33 years old, asymptomatic male, with a background of Complex congenital heart disease in the form of Transposition of great arteries post atrial switch procedure, was referred to the Bubble ECHO clinic, as the Cardiac MR scan was suggestive of a baffle leak via volumetric analysis but was unsuccessful in confirming a shunt visually.

The bubble echo test was performed by injecting agitated saline bubbles via an intra venous cannula in the right arm. The test was found to be negative for a leak at baseline but subsequently suggested significant shunting of bubbles from right to left on increasing intra thoracic pressures by manoeuvres such as coughing and Valsalva (Images 1,2 and 3). By right to left, in this scenario, it meant a leak in the venous baffles causing shunting of blood into the pulmonary baffle.

It is quite difficult to localise the exact position of this leak, but we thought it was most likely from the SVC or the common venous baffle as an injection through the arm would not necessarily opacify the IVC baffle. This patient then went on to have a cardiac MRI scan which suggested a mismatch in Qp:Qs but was unable to demonstrate a shunt on cine imaging.

The bubble echo hence confirmed the presence of the leak and provided a clear visualisation of the baffle leak. Based on the ECHO findings, this gentleman subsequently underwent a formal right heart catheterisation that confirmed a baffle leak for which he then underwent an intervention following an MDT discussion. 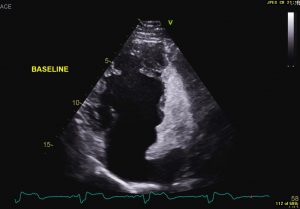 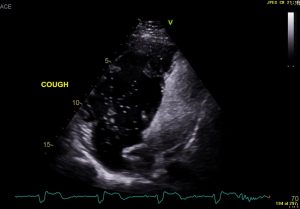 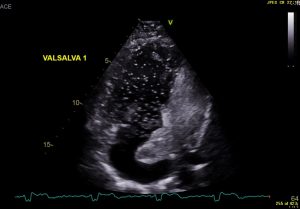 Image 3- Apical 4 chamber view displaying subpulmonic side opaque with agitated saline bubbles and a significant shower of bubbles seen entering the systemic side (pulmonary baffle and systemic ventricle) on performing the Valsalva manoeuvre.