Haemoptysis and an unusual ‘lung mass’

A young male patient presented to his GP after an episode of haemoptysis. He reported a 1 month history of dyspnoea, non-productive cough and intermittent fever. Initial chest X-ray (Figure 1) showed a 3.5 cm diameter rounded opacity in the right lower zone, with further patchy opacification in the left lower zone. This was initially reported as likely infective consolidation, but the clinical team’s differential diagnosis also included pulmonary embolus or malignancy. 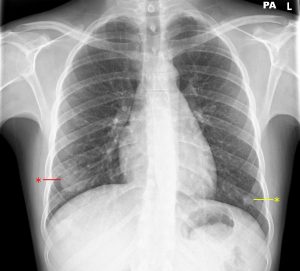 Arterial phase imaging through the lower lungs (Figure 2) showed a 3.5 cm contrast-filled lesion in keeping with a pulmonary artery aneurysm arising from a segmental branch of the right lower lobe pulmonary artery. Lung windows show some surrounding ground-glass change (Figure 3). Coronal MIP imaging (Figure 4) demonstrates a right lower lobe segmental artery pulmonary aneurysm clearly, with contrast within the lesion seen in continuity with the pulmonary trunk. A pulmonary vein is seen adjacent to the lesion, draining to the right atrium. There were a number of other areas of patchy areas of opacification located peripherally in the lungs (Figure 5). Small areas of pulmonary thrombus were seen proximal to some of these lesions. These were therefore felt to represent a mixed picture of multiple small areas of pulmonary haemorrhage, sub-segmental pulmonary emboli and focal areas of pulmonary infarction.

CT imaging of the abdomen (Figure 6) showed multiple wedge-shaped low-attenuation areas throughout both kidneys in keeping with perfusion abnormalities. There was however no other evidence of aneurysm or other significant findings in the abdomen or pelvis. 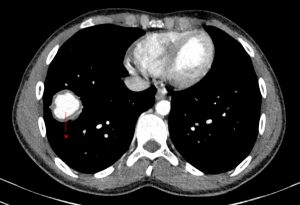 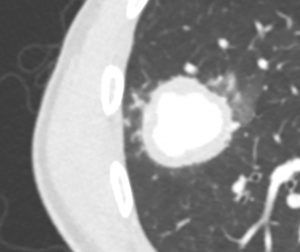 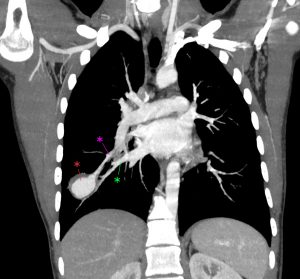 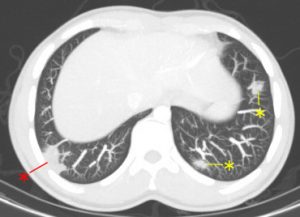 Figure 5. There were multiple other pulmonary abnormalities (asterisks), all located peripherally within the lungs. Some of these (red asterisk) had pulmonary thrombus proximal to them and were felt to represent pulmonary infarction. 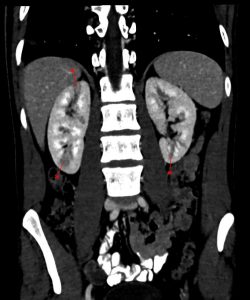 The impression at this stage was that findings may represent an underlying vasculitic process such as granulomatosis with polyangiitis (previously called Wegener’s granulomatosis), Takayasu’s arteritis or Behçet’s disease. After discussion with interventional radiology and cardiothoracic surgery, the patient underwent right lower lobe basal segmentectomy.

Histopathology of the resected lung demonstrated a necrotising inflammatory process associated with areas of pulmonary infarction and focal lymphocytic vasculitis of branches of the pulmonary artery. Findings were in keeping with either Behçet’s disease or Hughes-Stovin syndrome (a rare auto-immune condition similar to Behçet’s characterised by thrombophlebitis and pulmonary/bronchial aneurysms). The patient reported oral ulcers, but no other classical findings of Behçet’s disease, therefore the final diagnosis was felt to be either atypical Behçet’s disease or Hughes-Stovin syndrome.

Behçet’s disease is a multi-system autoimmune disease of unknown aetiology. It is more common in males and highest incidence in individuals aged 20-30, particularly those in the Middle East and Japan 1. Behçet’s Disease is likely the result of a complex interplay between various genetic and environmental factors (including certain infections and their antigens) and has been associated with HLA B51 and Factor V Leiden mutation 2.

Behçet’s disease is classically characterised by the triad of oral ulceration, genital ulceration and ocular lesions. As well as the aforementioned triad of symptoms, Behçet’s is a multi-system disorder and has the potential to involve the cardiovascular system (as in this case), the lungs, the gastrointestinal tract, genitourinary tract, the central nervous system, the skin and joints 3.

The patient in this case would have scored 3 points, being positive for oral aphthous ulcers and vascular manifestations. Pathergy refers to an exaggerated reaction to skin injury from minor trauma (such as a needlestick) and this patient was noted to develop thrombophlebitis at a number of peripheral venous cannula sites but had no definite evidence of pathergy.

Treatment and prognosis is variable, with some patients’ disease resolving spontaneously, others requiring long courses of corticosteroid therapy and other’s requiring management with surgery or interventional radiology. If the disease does resolve it also has the potential to recur at a later date 5.

2. What is the most common symptom in patients presenting with Behçet’s Disease

3. Behçet’s Disease is a vasculitis that can affect large, medium and small vessels. Which of these             vasculitides is classically considered a large vessel vasculitis?